Anniversary of the Foundation of the Columban Sisters in Cahercon

The Missionary sisters of St Columban were founded in Cahercon, Kildysart in February, 1922  and received Papal approval in 1924. As we celebrate the 90th anniversary of the establishment of the Columban Sisters we remember all the sisters, many of them from Kildysart and the surrounding parishes who left Cahercon and went to China to preach the Gospel.

Fr Peadar O’Loughlin, who is a member of the Missionary Society of St Columban, will speak at 11am Mass in Kildysart on Sunday 28 September 2014 on the Sisters, their work and links with Kildysart. He also wishes to convey the Sisters’ thanks to the people of Kildysart for their support over the last 90 years.

The Sisters were founded by Frances Owen-Lewis. She was born in Marylebone, London, England in April 17, 1873, one of a family of six.  Her father had an estate at Inishkeen, Co. Monaghan and for a time was M.P. for Carlow.  In 1897 she married Captain Sir Alfred Moloney K.C.M.G., Governor of the Windward Islands and later Governor of Trinidad, West Indies. He suffered from ill-health and when they were in Italy in 1913 he became seriously ill and died in hospital.  While grieving for him, Frances had an audience with Pope Pius X who assured her that God would comfort her in his own way. END_OF_DOCUMENT_TOKEN_TO_BE_REPLACED

Congratulations to the committee and all who worked to make the event such a great success and to all the participants.

points which is an increase of six points on the 2013 result. The judges commented on the beauty of the streetscape, the tidiness of the village, the absence of graffiti and the impressive level of community involvement. To read the full report please click here 2014 Kildysart Tidy Towns Report

The Permanent Diaconate A Pastoral Letter from Bishop Kieran O’Reilly 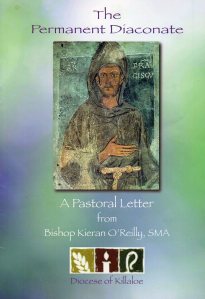 The Bishop of Killaloe, Most Revd Kieran O’Reilly SMA  has written a Pastoral Letter to the people of the diocese on the Permanent Diaconate which he plans to introduce.